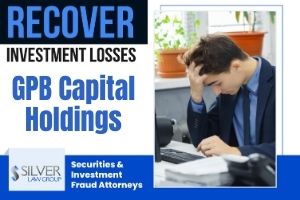 Scott Silver, Silver Law Group’s managing partner, was recently interviewed for an article on Investmentnews.com that details the alleged “hot air” spewed by brokers to sell $1.8 billion of GPB Capital Holdings to investors.

Silver Law Group represents investors in claims to recover GPB investment losses. If you have losses from investing in GPB, contact Silver Law Group for a no-cost consultation at (800) 975-4345 or at ssilver@silverlaw.com.

Founded in 2013 by Scientologist David Gentile, GPB calls itself an alternative asset manager that invested in income-producing companies, including auto dealerships and a waste management company. To raise capital, the company used dozens of regional broker dealers and advisory firms across the country to sell private placements  in its various funds to investors.

Investors were told by their brokers and financial advisers that they were buying into a company that would pay 8% distributions and may one day go public to give them additional return.

GPB private placements have not performed the way investors believed they would. In 2018, GPB stopped paying distributions to customers. In 2019, the FBI raided the company’s offices, class action lawsuits were filed, and the company reported that the value of its funds was down significantly.

Even with all the issues, investors have no choice but to hold their GPB investment and risk further loss of value, because of its illiquidity.

In February, 2021, a federal indictment was unsealed against David Gentile (GPB’s founder and CEO), Jeffrey Schneider (CEO of Ascendant Capital, GPB’s placement agent), and Jeffrey Lash (managing partner). They are accused of running a “Ponzi-like scheme”.

With the criminal charges, and the assumption that investors will have significant losses, increased attention is being paid to the tactics brokers and advisers used on prospective investors when selling GPB.

GPB was not sold by the largest, most reputable brokerage firms. It was sold by smaller firms who were drawn to the large commission they received for selling the investment. It’s been called “the lowest rung on the financial advice ladder”.

Some brokers claimed there was a connection between GPB and Merrill Lynch. InvestmentNews.com used an email from a broker to a client that states “GPB is working closely with Merrill Lynch…If GPB elects an [initial public offering] as its exit strategy, the Merrill Lynch [sic] would be the lead underwriter.”

“That was Hall’s pitch to clients, that he had visited with the principals of GPB and Ascendant in Texas…Hall claimed GPB was cash-flow positive, it was buying auto dealerships and Merrill Lynch was the expert in the field. Take the 8% yield and get a pop on the IPO,” Investment News reported.

A connection to the prestigious investment bank gave credibility to GPB, but a Merrill Lynch spokesperson said they were not aware of any connection with the company, according to the article.

The high commissions and pricey underwriting for client events should have been warning signs for brokers and advisers. If GPB was as great as it claimed to be, why did it have to spend so much to raise capital? With the recent federal indictments and other issues, it seems the answer is clear.

Many broker-dealers are defending FINRA arbitration claims brought by clients in an attempt to minimize their GPB losses. Some advisers have expressed regret for selling the product to their clients.

Broker-dealers are required to recommend only suitable investments to their clients and to perform adequate due diligence on the products they sell. FINRA-registered brokers and firms are subject to arbitration to resolve disputes. Silver Law Group reportedly filed the first arbitration claim in the country related to GPB in 2019.