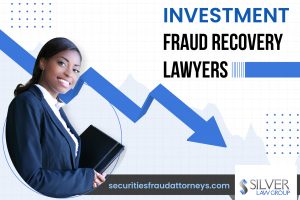 In our Silver Law securities arbitration and investment arbitration blogs, we highlight individuals who were caught taking financial advantage of their investment clients. In many cases, the investors are elderly, and sometimes, inexperienced at investing. And in some cases, the brokers and advisors are elderly themselves, caught committing fraud after a successful decades-long career. These individuals should understand what constitutes fraud, particularly against elderly clients. Still, they do it anyway.

Many times, these elderly clients do not completely understand the complex investment information they are presented with. Some may be too polite to ask questions or challenge the representative. In other cases, they may be experiencing the beginnings of cognitive decline that isn’t  obvious and hasn’t yet been detected by family or their physician. This lapse in mental acuity can allow a fast-talking broker to convince them of something to which they would otherwise say “no.”

Although California has the largest number of elderly citizens, Florida has the highest percentage of elderly residents in the US. A full 19% of Florida’s population is over 65, and the numbers are increasing. It’s estimated that by 2050, elderly people in the US will top 80 million.

Many of these elderly are financially well-off, and some are millionaires. A number of them will pass along their wealth to their children and grandchildren. These sums may be transferred more than once through parentage. So it’s highly likely that these elders can and will be targeted for fraud by any number of people. From distant family members who are suddenly friendly to caretakers, neighbors, brokers and financial advisors, and “new friends,” they all see an elderly person with money as an easy target.

In October of 2014, the State of Florida passed Florida Statute 825.103, regarding the
“abuse, neglect, and exploitation of elderly persons and disabled adults.”

Elder exploitation is also a part of the law. The presumption is the new laws that a person over 65 who transfers $10,000 to an individual that they have known less than two years and are not related to and does not receive anything in return of an equivalent financial value is an instance of exploitation.

Individuals who can be held liable for elder exploitation under the law include:

In short, anyone who uses another’s funds with the intent to deprive them of assets, funds, and/or property, and to benefit someone other than the rightful elderly or disabled owner can be found liable for elder exploitation. This can include a stockbroker, investment advisor, or other financial services representative.

Mrs. Schottenstein’s family fortune came from retail chain stores including DSW, American Eagle Outfitters and others. She alleged that her two grandsons made multiple “extremely complex, highly risky” investments worth approximately $72 million. While the grandsons and JP Morgan Chase made hundreds of thousands in fees and commissions, Beverly Schottenstein’s account lost more than $10 million.

The claim alleged that the grandsons were responsible for thousands of transactions that were worth hundreds of millions of dollars, particularly where they and the firm would earn substantial profits as a result.

The attorney for Beverly Schottenstein stated that the grandsons were making these trades on their own without permission from their grandmother. Since she didn’t have computer, she was unable to execute any trading or transactions for herself. The grandsons forged emails with her name on them to get approval for some of the trades, and encouraged their grandmother to destroy any paperwork she had from the firm.

FINRA also noted Florida’s elder abuse statutes in its ruling. Beverly Schottenstein’s attorney believes that the grandsons are both guilty of elder abuse, bringing the possibility of criminal charges later.

FINRA awarded Mrs. Schottenstein $19M in damages in the case.

Silver Law Group represents investors in securities and investment fraud cases. Our lawyers are admitted to practice in New York and Florida and represent investors nationwide to help recover investment losses due to stockbroker misconduct. If you have any questions about how your account has been handled, call to speak with an experienced securities attorney. Our Florida investment fraud attorneys have handled cases involving unsuitable investments, breach of fiduciary duty, Ponzi scheme victims and trust and estate abuse. Most cases are handled on a contingent fee basis, meaning that you won’t owe us until we recover your money for you. Contact us today and let us know how we can help.