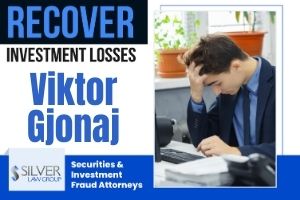 Silver Law Group is investigating potential claims on behalf of victims of an alleged fraud perpetrated by Detroit, Michigan-based Viktor Gjonaj. According to a press release from the Securities and Exchange Commission (SEC), Gjonaj “allegedly defraud[ed] members of the Albanian-American community out of approximately $26.4 million, some of which he spent playing the Michigan State Lottery.”

On January 28, 2021, the SEC filed a Complaint against Viktor Gjonaj in United Stated District Court for the Eastern District of Michigan. The Complaint states that “[t]he SEC brings this civil law enforcement action to address Defendant Viktor Gjonaj’s fraudulent offer and sale of securities to at least 24 investors . . .”  The SEC alleges that Gjonaj’s conduct violates Section 17(a) of the Securities Act as well as Section 10(b) and Rule 10b-5 of the Exchange Act. The SEC is seeking an order permanently restraining and enjoining Gjonaj from further violation of federal securities laws, an order requiring Gjonaj to pay disgorgement—his ill-gotten gains from the scheme, and civil penalties.

Specifically, the SEC alleges that Gjonaj engaged in the following misconduct as part of the alleged fraud:

A U.S. Department of Justice (DOJ) press release noted that Viktor Gjonaj has also been charged with one count of wire fraud. The DOJ states that following an investigation by the FBI, the DOJ now alleges that to further his fraudulent scheme, Gjonaj “created a fake title company” and “instructed the victim-investors to wire-transfer money into the bank account of the fake company.”

Unfortunately, Gjonaj’s alleged scheme is one among many recent real estate frauds and Ponzi schemes that have been recently uncovered. While many real estate schemes can be highly complex and well-concealed, it is equally common for alleged fraudsters like Gjonaj to create real companies, documents, and bank accounts and simply use them to funnel investor funds to their own purposes.

Investing in real estate vehicles requires substantial due diligence, including researching any SEC registration documents or other regulator-filed paperwork, reviewing financial data prepared by an independent auditor, and consulting with a trusted financial and/or real estate professional.

Did You Lose Money Investing In A Real Estate Deal With Viktor Gjonaj?

Silver Law Group is working with Detroit, Michigan counsel to investigate claims including potential claims against third parties that participated in the fraud. Our attorneys have represented many Ponzi scheme victims in Michigan, including a substantial recovery for victims of the Ed May Ponzi scheme. Lawsuits are typically handled on a contingency fee basis and we only get paid if we recover money.

If you lost the money you “invested” with Gjonaj, contact Silver Law Group for a confidential consultation at (800) 975-4345 or email ssilver@silverlaw.com to get in touch. Silver Law Group is investigating potential claims that may be brought on behalf of investor-victims seeking to recoup their losses. Silver Law Group has extensive experience passionately representing the interests of Ponzi scheme and financial fraud victims, both in individual claims on a contingency fee basis, and in class actions.  Reach out to see if we can help you today.