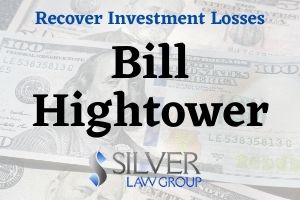 The Securities & Exchange Commission (SEC) found that Bill Hightower was, while employed for Legacy Asset Securities, also the CEO of Hightower Capital Group (HCG). HCG was his own private and unregistered company where he conducted business away from Legacy.

The SEC investigation found that Hightower transferred sums of money from two clients into HCG under the guise of “investment.” On 3/14/2015, Hightower transferred $800,000 into the HCG accounts. Then on 1/14/2015, he transferred $900,000 from a second client’s account into HCG. Both transfers were used to pay previous “investors” in HCG, as well as for personal expenses.

As a result, the SEC entered a judgment against Hightower for $9.5M after he pleaded guilty to two counts of wire fraud. The SEC also barred Hightower from being associated with a broker, dealer, investment advisor, and other financial services.

This wasn’t the first time Bill Hightower was found to have conducted private transactions outside of his employer firm. In 2014, FINRA began an investigation that Hightower had also directed some of his clients to a private securities transaction that was unapproved by Legacy. He refused to provide information to FINRA as requested, including a list of clients who were referred to this transaction. He signed an Acceptance, Waiver & Consent (AWC) letter, and was barred from association with a FINRA member as of 10/7/2015.

These two regulatory actions followed multiple customer disputes filled against Hightower. Two of these disputes were the subject of FINRA arbitration.

The four most recent customer disputes, filed in 2019, involved his tenures at both UBS and Legacy. The allegations include:

Two customers filed disputes in 2015 and 2018, both of which went to FINRA arbitration.

The first claim, filed in 2015, alleged “unsuitability of investments, misrepresentations and unauthorized trading in accounts.”  These investments included a “private annuity” issued by Hightower and/or HCG, as well as two private placement investments that were later discovered to be Ponzi schemes. The clients requested damages of $1,000,000 and through arbitration, the claim was settled for $40,000.

In the second, filed in 2018, alleged that Bill Hightower sold unsuitable investments to the client. These “investments” were the same as the ones in the 2015 claim. Through arbitration, his claim was settled for $1,282,235.87.

In addition to two FINRA arbitration cases, a client dispute filed on 3/8/2016 alleged that Hightower “recommended the purchase of a high risk, illiquid and unsuitable unregistered security. Claimant further alleges omissions and misrepresentations regarding this recommended investment.” The client requested damages of $150,000, and the claim was settled for $125,000.

Did You Invest With Bill Hightower?