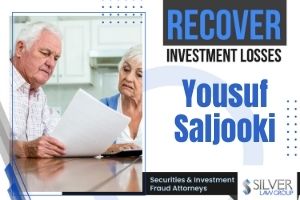 We’ve reported on Yousuf Saljooki (CRD#: 5045123, aka Joe Saljooki, and Joseph Saljooki) on two previous occasions regarding his two suspensions by the State of Arkansas and subsequently by FINRA for many of the same infractions.

Even though Worden Capital discharged Yousuf Saljooki in 2018, additional actions were recently filed against him.

In a FINRA arbitration action dated 3/4/2019, Saljooki, along with several other respondents, were the subject of a claim described as:

After one such related transaction, the client’s entire investment was lost.

A disciplinary action from FINRA’s Department of Enforcement dated 7/29/2019 addressed:

Separately, FINRA issued an Acceptance, Waiver & Consent letter to Saljooki, which he signed on 7/2/2019. This letter included an administrative fine of $20,000 and a nine-month suspension that ended 5/4/2020.

Another FINRA disciplinary action regarding Yousuf Saljooki’s failure to comply with the award of $706,793.84 led to an indefinite suspension beginning 3/31/2020, until heh pays the award in full.

The client requested damages of $97,292.27. In the dispute resolution arbitration, FINRA awarded the client the sum, jointly and severally from Saljooki and another respondent, as well as interest in the amount of 10% per annum from 2/11/2020 until the amount is fully paid. Additional awards include $12,500.00 in punitive damages pursuant to CA Civil Code section 3294 and the CA Elder Abuse and Dependent Adult Civil Protection Act, and attorney’s fees of $11,500 from both individuals.

In another action originally filed on 4/7/2020, FINRA began an investigation into possible undisclosed outside business activities (OBA) by a person related to Saljooki during his association with Worden. Information obtained from the relative indicated that Saljooki himself was involved in OBAs. On four occasions, Saljooki failed to appear as requested for on-the-record testimony in the investigation, claiming his wife’s pregnancy, the subsequent newborn, and the coronavirus pandemic as reasons for failing to appear. He also failed to respond to repeated requests for information related to the investigation despite multiple opportunities. In the final decision on 11/12/2020, FINRA indefinitely barred Yousuf Saljooki from any and all association with a member firm in all capacities.

Another FINRA sanction for failing to comply with another award led to a second bar, indefinite and effective on 11/11/2020.

Two new customer disputes were filed on 11/15/2020 and 11/19/2020, respectively. Both had with similar allegations of churning, unsuitability, breach of fiduciary duty and contract, and unauthorized trading. The first client’s requested damages are $49,184.62, and the second damage request totals $130,165.00. Both disputes are currently listed as “pending,” and no additional information is available.

Have You Invested With Yousuf Saljooki?