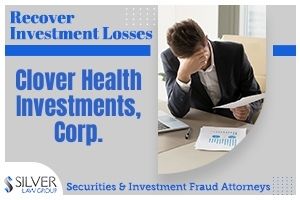 This report, at a minimum, raises serious questions about Clover’s practices leading up to and following its IPO, which was completed via reverse merger with a Special Purpose Acquisition Corporation (SPAC). Investors who suffered losses investing in Clover Health may be entitled to recovery for this alleged misconduct.

In the past weeks, several class actions have been filed that further allege serious issues regarding Clover Health. Specifically, these lawsuits allege that the company made materially false and misleading statements in connection with taking the company public. Many of these lawsuits also name well-known venture capitalist Chamath Palihapitiya as a defendant, alleging that he made several supportive statements lauding Clover for, among other things, its transparency and strong business model. Notably, the Hindenburg report questions whether Palihapitiya’s endorsement could be connected to the fact that his firm received over 20 million “founders shares” in exchange for $25,000 and promoting the Clover Health SPAC.