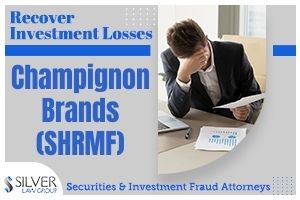 Silver Law Firm is investigating Champignon Brands, Inc. (SHRMF) regarding potential claims for investors in the company to recover losses. The company is under scrutiny after allegations of potential violations of federal securities laws.

If you have losses from investing in Champignon Brands, Inc. (SHRMF), contact Silver Law Group for a no-cost consultation at (800) 975-4345 or at ssilver@silverlaw.com.

Champignon Brands is a company that advocates the use of psychedelic medicines in the mental health field, including a network of ketamine clinics that offer rapid-onset treatments for conditions such as depression and PTSD.

The company issued a press release on February 17, 2021, announcing that after a review by the British Columbia Securities Commission, they would be withdrawing and refiling their condensed interim consolidated financial statements and management’s discussion & analysis (MD&A) for the three and six month periods that ended March 31, 2020 (the “Original Financial Statements and MD&A”).

After the company issued these statements, management recognized that assets previously classified as “intangible” were not, in fact, intangible. The assets in question were connected to the acquisitions of:

At a total of $12M, the assets were later determined not to meet the definition of “intangible,” leading to an update that would see the assets changed to “tangible.” The assets were recorded as transaction costs in the Company’s statement of loss and comprehensive loss in the restatements.

In a subsequent press release issued on March 11, 2021, Champignon indicated that the company had issued condensed interim consolidate financial statements after the review by the British Columbia Securities Commission.

Additionally, the previously “intangible” assets were restated in Acquisitions from $0 to $13,517,014 for both the three- and six-month periods ending on March 31, 2020.

Also with respect to the Acquisitions, a shareholder and contracted consultant (the “Consultant”) of the Company was a related party. In response, Champignon disclosed the proceeds and stock options paid to the Consultant, which is discussed in the Restated Financial Statements and the MD&A. The consultant was also a shareholder of each of the entities involved in the Acquisitions, receiving shares of the company as part of the consideration. Champignon terminated the consulting agreement on November 17, 2020.

The company also issued interim financial statements for the periods ending June 30, 2020 and September 30, 2020, which included the acquisition of AltMed Capital Corporation on April 30, 2020.

Are You An Investor In Champignon Brands?

If you’re an investor in Champignon Brands, you’re encouraged to contact The Silver Law Group for additional information and to help us in our investigation.