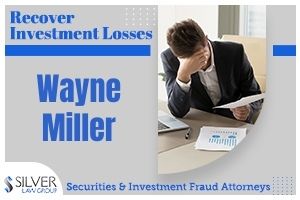 Miller is the subject of eight disclosures, seven of which are related to his tenure at the now-defunct  Accelerated Capital Group. He was named in these disputes due to being named “owner and control person” while at ACG until he left on 2/2/2018. Miller left the firm more than a year before the firm was expelled by FINRA for misleading advertising and failing to establish and maintain a supervisory system. Before its expulsion, the firm was subjected to censures and fines for misconduct.

The most recent was filed on 9/25/2020, and alleged “unsuitable placements of alternative investments,” with requested damages of $13,204,427.00. Miller was not the broker of record, and denies the allegations. This claim is pending.

The next dispute was filed on 11/25/2019, alleging “breach of fiduciary duty, negligence, breach of contract in private placement offerings purchased in 2013 and early 2014.”  Miller denies the allegations and was named because he was an owner and control person at ACG. No claims of damages are indicated. This claim is also pending.

The next claim was filed on 10/10/2019, alleging “breach of fiduciary duty and negligence in reference to private placement offerings purchased” from 2016 through March of 2018. This claim requests damages of $620,000, and is still pending. Miller was not the broker of record, and denies the claims.

A previous claim filed on 8/15/2018 was settled. The dispute contained allegations of “negligence, over-concentration, breach of fiduciary duty, breach of contract, material misrepresentation and omissions and failure to supervise.”  The client requested damages of $340,000, and the claim was settled by an outside RIA for $95,000. Miller denied the claims, and did not contribute to the settlement amount.

FINRA suspended Miller from 1/2/2018 through 7/2/2018, and fined him $10,000 after failing to supervise ACG’s Chief Compliance Officer (CCO) and the firm’s supervisor for registered representatives for a branch office in Irvine, CA. Miller believed the individual had the skills to perform the necessary job skills, but didn’t monitor job performance nor observe any “red flags” that indicated any deficiencies. Additionally, Miller failed to take any remedial action even after the CCO informed him that she was having difficulty with ACG’s systems.

Miller also failed to take action after the CCO informed him that one of the registered representatives was excessively trading mutual fund “A” shares. Although the rep was placed on “heightened supervision,” neither Miller, the CCO, nor anyone else with ACG contacted the firm’s customers.

If someone with ACG had contacted the firm’s customers, they would have been discovered that in nine of the eleven customer accounts, the trades were unauthorized. This same rep was using a so-called “swing trade” strategy for the same customers. These issues went unnoticed because there wasn’t an effective excessive trading exception report system, and because the CCO did not have the ability to detect these exceptions with the firm’s existing trading blotter.

A customer dispute filed on 6/7/2016 alleged breach of fiduciary duty as well as several other violations of FINRA rules, California securities laws and federal securities laws, as well as negligence and negligent supervision. The client requested damages of $130,000.00, and the claim was settled for $110,000. During arbitration, Miller was named in the arbitration as a “control person” for ACG.

On 1/8/2016, a customer filed a dispute alleging unauthorized and excessive trading, requesting damages of $200,000. The claim was settled for $165,000, and Miller was again named in the arbitration as a “control person.”