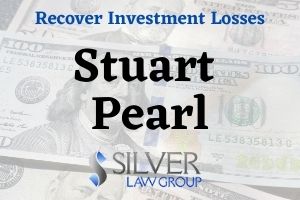 Stuart Pearl (Stuart L. Pearl CRD#: 1500833, aka “Stu Pearl”) is a currently registered investment advisor and previously registered broker whose last known employment was with David A. Noyes & Company (CRD#:205) of Indianapolis, IN. Previous employers include Ameriprise Financial Services, Inc. (CRD#:6363), Morgan Stanley Smith Barney (CRD#:149777) and Citigroup Global Markets Inc. (CRD#:7059) of Deerfield, IL. He has been in the industry since 1986.

Pearl is the subject of eight disclosures, the most recent of which was filed on 5/18/2020. This customer dispute alleges that Stuart Pearl created a margin trading account without discussing it with the client first. The client requests damages in the amount of $2,088,124.00. This case is currently listed as “pending.”

A previous customer dispute filed on 3/10/2019 alleges that Pearl “put on a large hedge position in customer’s account without the customer’s knowledge.”  The client requested damages in the amount of $85,000, and the company settled for $42,500.

Pearl resigned from his last known employer David A. Noyes on 3/7/2019 after being placed on “heightened supervision.” Although he resigned, he had not followed this supervision plan as the firm required. Had Pearl not resigned on his own, the firm planned to terminate him.

In an action initiated by FINRA, Pearl was suspended for 45 days and fined $7,500 for activity related to his tenure at Ameriprise. In the first instance, Stuart Pearl failed to speak with a customer to confirm a previously discussed liquidation of securities, and did not obtain written authorization and written acceptance by the company of the account as “discretionary.” This activity occurred in May of 2015.

Previously, two of Stuart Pearl’s retired customers opened a joint brokerage account with him at Ameriprise, allowing securities to be purchased on a margin. Retired and in their 70’s, they were interested in a conservative risk tolerance for growth and income.

Between 9/2011 and 3/2012, Pearl recommended the purchase of four securities valued at $122,000 on margin. During this period, the clients went from no margin debt to a considerable increase in debt and were subjected to seven margin calls. The couple filed a customer dispute on 5/29/2012, requesting damages of $80,000. Ameriprise settled the case for $55,000.

Ameriprise terminated Pearl’s employment on 6/30/2015 in relation to these activities that later caused the suspension by FINRA.

In a separate customer dispute filed on 2/28/2013, a client alleged that Pearl bought and sold investments without consulting her first, “exercising de facto discretionary control.” Additionally, the client claimed that Ameriprise “over traded and heavily margined” her account, as well as recommended unsuitable investments. The client requested $300,000 in damages, and Ameriprise settled the case for $95,500.

Did You Invest With Stuart Pearl?