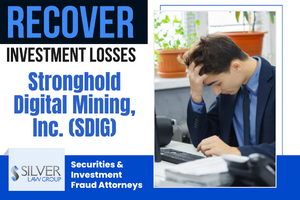 Stronghold Digital Mining, Inc. (SDIG) is the subject of a class action lawsuit and is being investigated by Silver Law Group regarding possible violations of the federal securities laws.

Stronghold Digital Mining held its IPO in October, 2021 with the offering of over 7 million shares of common stock at $19 per share. Net proceeds from the offering were $132 million. B. Reiley Securities and Cowen were the book-running managers, with Tudor, Pickering, Holt & Co. as lead manager and D.A. Davidson & Co, Compass Point, and Northland Capital Markets as co-managers for the offering.

Stronghold’s CEO noted “significant headwinds in our operations which have materially impacted recent financial performance.” The news caused Stronghold’s stock price to fall 32% to $6.97 per share on March, 30, 2022. As of this writing, the company’s stock trades at around $4 per share.

It has been alleged that Stronghold’s IPO registration statement was materially false and misleading. The company is alleged to have omitted that contract suppliers were likely to miss anticipated delivery deadlines and quantities causing risk that Stonghold could not expand its mining capacity as requested, among other allegations.

In April, 2022, a class action lawsuit was filed that charges Stronghold and certain of its executives and officers and its IPO underwriters with violations of the Securities Act of 1933.

Silver Law Group is a nationally-recognized law firm representing victims of securities and investment fraud. We represent investors in class action lawsuits against issuers in federal and state court as well as investors in securities arbitration claims against brokerage firms for stockbroker misconduct.