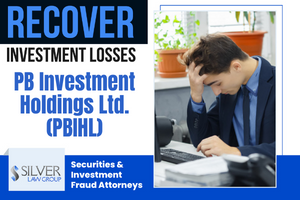 Silver Law Group has filed a FINRA arbitration claim against Cetera on behalf of a client who invested $1 million in PB Investment Holdings Ltd. (PBIHL), a Northstar Bermuda product.

Our client is a retired Chinese national in her 70s who worked hard for years to save money for herself and her family. She sought additional safety by keeping some of her savings in an account at East West Bank in the Unites States. East West Bank referred her to a financial adviser who worked for Cetera Investment Services LLC.

The statement of claim filed on behalf of our client notes that “(t)he practice of referring retail banking customers to Cetera brokers was a routine business practice at East West Bank and Cetera. This practice came under heavy scrutiny from the United States Securities and Exchange Commission.”

The SEC found that “(s)ince at least January 2007, Cetera has paid cash fees to approximately 350 banks to, among other things, solicit investment advisory clients on behalf of Cetera… As part of this process, Cetera did not require the banks to give clients a separate written disclosure document or otherwise provide the information required under the Solicitor Rule…Cetera’s clients were not informed of the extent of the banks’ financial interest in the clients’ choice of Cetera as an investment adviser and did not have all of the information that would enable them to evaluate the solicitor’s recommendation.”

Cetera was ordered to stop their misconduct and pay a civil penalty of $185,000.

Cetera and the financial adviser also claimed that they understood PBIHL, had thoroughly investigated it, and would monitor it to make sure our client’s principal was protected. Because of those representations, in 2016 our client invested $1,000,000 in a fixed rate product from PBIHL.

The statement of claim alleges that Cetera (Respondent) failed to conduct adequate due diligence, and failed to uncover or ignored the illiquid, speculative, and risky nature of the PBIHL investment. Due to this misconduct, our client (Claimant) lost all $1,000,000 of her principal investment and the interest earned.

PBIHL offered investments not based in or registered in the U.S., which are called “offshore”. The statement of claim alleges that Cetera did not disclose that PBIHL was not subject to regulation by FINRA or the SEC, increasing the risks associated with the investment.

“(M)any of the assets held by the company could be, and ultimately were, funneled into insiders’ pockets via self-dealing transactions and risky investments,” the statement of claim alleges.

By late 2016, it was known that Beechwood had given over $200 million of client money to investments tied to Platinum Partners, which the SEC had sued for defrauding investors. The FBI also filed criminal charges against Platinum Partners’ co-owner.

In 2017, PBIHL was sold to a company owned and controlled by billionaire Greg Lindberg, who engaged in self-dealing to direct money from his companies to himself. Lindberg used his ill-gotten money to buy a 214-foot yacht, a mansion in the Florida Keys, and a Gulfstream jet. Lindberg was convicted of bribery and is incarcerated in federal prison as of this writing.

As investors learned about criminal prosecution of Lindberg, PBIHL investors asked to withdraw their money, but there wasn’t enough money to pay them. In 2020, Northstar Financial Services (Bermuda), which was also owned by Lindberg, petitioned the Bermuda Court to include PBIHL in liquidation proceedings related to multiple companies owned by Lindberg.

Our statement of claim alleges that Cetera failed in its obligations to perform adequate due diligence into PBIHL, made misrepresentations, breached its fiduciary duty, overconcentrated our client, was negligent, failed to supervise, and other claims. We requested that our client be fully compensated, including being paid interest owed and punitive damages.

Do You Have Investment Losses With PB Investment Holdings Ltd (PBIHL) Or Northstar Financial Services (Bermuda)?

Many investors reside in Asia, Latin America, or elsewhere, and we are able to represent investors wherever they are. If you have losses from investing in a Northstar Financial Services (Bermuda) product, contact Silver Law Group for a confidential consultation toll free at (800) 975-4345 or email ssilver@silverlaw.