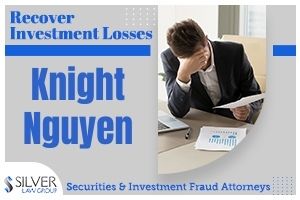 The SEC today filed a complaint and a request for jury trial involving claims against Knight Nguyen Investments of Katy, Texas, along with:

Although Christopher Lopez is not a registered broker, he was previously registered the SEC and the state of Texas for several years.

What they actually allegedly did was invest client’s funds into high-risk securities that were largely owned and/or controlled by the Lopez brothers. Jayson Lopez also misused investor funds and assisted the scheme by fabricating documents, including false financial statements.

From March 2016 through September 2018, Christopher Lopez and Forrest Jones targeted older and unsophisticated investors who were interested in growing their retirement savings. Both claimed to these clients that Knight Nguyen’s investments were “proven” companies that met the firm’s investment standards. Unfortunately, that wasn’t the case.

During this time, Christopher Lopez and Jones raised $3.7 million from about 70 clients and investors in multiple states for these “low-risk alternative investments” while directing the funds to fraudulent and high-risk investments. The companies they invested client’s monies into five high-risk issuers where the clients would either likely never see their principal again nor any returns. Most had little or no earnings or revenue, or were associated with or owned by the Lopez brothers.

The complaint states, “To lure these individuals to become clients, Chris Lopez and Forrest Jones falsely portrayed KNI as an established firm with a proven track record, telling prospective clients that KNI would only recommend or place clients in investments in companies with a proven history of financial earnings that were secured by real assets.”

Although the firm is registered in Texas, Knight Nguyen also has a satellite office in Orlando, FL.

During the time he worked with the Lopez brothers at Knight Nguyen, broker Forrest Andrew Jones (CRD:# 4880765) was also employed with Merrill Lynch in Conroe, TX. He has been in the industry since 2004.

Jones himself has one currently pending customer dispute, filed on 5/21/2020. In it, the customer alleges unsuitable investment recommendations and misrepresentations, and requests damages of $335,000. However, there is no indication of the complaint’s associated firm.

Shortly thereafter, the SEC began its investigation on 6/24/2020 into “Allegations of misrepresentations and omissions in connection with the offer or sale of promissory notes and other private placements.” Again, there is no indication of the complaint’s associated firm.

Merrill Lynch then followed on October 13, 2020 by discharging Jones for “Loss of management confidence resulting from a regulatory investigation and conduct including failure to disclose an outside business activity.”

Jones has two previous and unrelated disclosures, one for a civil judgment of $550 from 2015, and a financial lien from 2014 that lists “direct payment procedure.”

Did You Invest With Knight Nguyen?