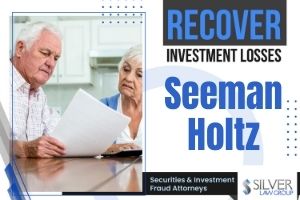 Silver Law Group is representing clients who invested in Seeman Holtz promissory notes, which were sold primarily to senior investors. The company has not paid the insurance-policy backed notes when they matured.

On Friday, June 11, 2021, partner and co-founder Eric Holtz died by suicide in California. In a press release, the company announced Holtz’s death, but denied that it was related to the pending lawsuits. The suits were filed on June 7th, and company was notified of the lawsuits on June 14th.

The company had previously claimed it could not repay investors due to “financial problems.” Seeman Holtz has recently auctioned its property and casualty insurance business, Seeman Holtz Property & Casualty. Additionally, public records state that Seeman Holtz received $4,269,400 in PPP funds on April 7th, 2020.

“Our clients were told to invest every dollar they had in the world with these investments. I’ve spoken to investors who had from $100,000 to $10 million invested with Seeman Holtz and they are panicking,” said Scott Silver, Silver Law Group’s managing partner.

Silver Law Group has filed lawsuits on behalf of Seeman Holtz investors who have been refused repayment, as well as a federal class action suit after speaking with additional investors telling the same story. Although the additional plaintiffs’ losses are estimated to be $10 million, Mr. Silver believes the actual loss amount is much higher.

The company sent sales reps into affluent retirement communities, many in South Florida, selling people what they described as “safe and secure” investment vehicles that would provide a steady stream of income. Many of these clients were unfamiliar with complicated investment products, and were convinced to put their entire life savings into the notes.

After Seeman Holtz began having “financial problems,” Scott Silver and other attorneys filed lawsuits against the company after investors were refused payments.

One plaintiff, 76-year-old Broward County resident Fanny Millstein, is facing the possibility that the life savings of her and her husband have been lost. The lawsuit for Mrs. Millstein also stated that Seeman Holtz was “unwilling or unable” to provide information about the value of the notes or the assets.

Some investors were in their 90s, and invested considerable sums expecting similar returns. Unfortunately, those returns never appeared, and those who began asking for their money received only excuses. Many are now facing difficult decisions without the money they were counting on. With the death of Eric Holtz, the future of their investment is even more unclear.

The lawsuits are an abrupt change for the company that was, until recently, a high flyer. Just last November, the company expanded its management team for its private client group and high-net-worth personal lines insurance division. And two years ago, the company purchased the Schwartz Insurance Agency of Wisconsin.

Have You Invested In Seeman Holtz?