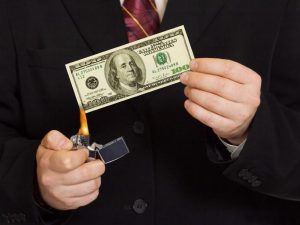 Paul William Murans (CRD #3266607, aka “Peace Murans”) is a registered broker and investment advisor currently employed with Thurston Springer Financial (CRD #8478) of Indianapolis, IN. His previous employers include UBS Financial Services Inc. (CRD #8174) and Merrill Lynch, Pierce, Fenner & Smith Incorporated (CRD #7691), also of Indianapolis, and UBS Painewebber Inc. (CRD #8174) of Weehawken, NJ. He has been in the industry since 1999.

Murans is the subject of six disclosures, two of which are employment separations. His most recent disclosure was filed on 11/18/2018, carried over from his previous employment with UBS Financial Services. The client claims that from 12/2/2013 through 10/20/2017, Murans misrepresented a “life settlement contract” that was ultimately unsuitable, and unauthorized trading of “structured products.” The client also alleged that she was completely unaware that she was borrowing from her loan account. Murans denies the allegations, and has requested copies of the complaint, as has Thurston Springer Financial, but UBS has not supplied the requested information to verify the complaint. The case was settled for $250,000.

Murans’ next dispute was filed 3/29/2018. The client alleges that from 12/12 through 10/17, Murans over-concentrated their investments in SPXU and TWM, leveraged ETFs, and that these were unsuitable for their investment objectives. Over-concentration in risky energy-related investments were also alleged, and also not suitable, as well as UBS’ failure to supervise. The customers requested damages of $700,000; the firm settled for $355,000. Murans denies the accusations and was not asked to contribute to the settlement.

Another customer dispute filed on 8/1/2016 lists allegations of unsuitable recommendations. The customer requested damages of $250,000, and the case was settled for $75,000.

Murans’ final disclosure details his departure from Merrill Lynch on 3/11/2011. Although the separation is listed as “voluntary,” the company reports that Murans was involved in “outside investments and/or activities” that Merrill Lynch was not notified of. Murans’ rebuttal states that he left for a better opportunity with UBS.

Silver Law Group represents investors in securities and investment fraud cases. Our lawyers are admitted to practice in New York and Florida and represent investors nationwide to help recover investment losses due to stockbroker misconduct.  If you have any questions about how your account has been handled, call to speak with an experienced securities attorney. Most cases are handled on a contingent fee basis, meaning that you won’t owe us until we recover your money for you. Contact us today and let us know how we can help.