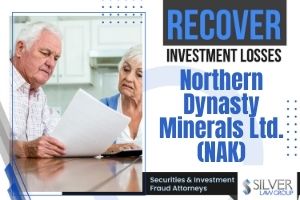 Northern Dynasty Minerals Ltd. (NAK), a mining company, is the subject of a class action lawsuit regarding potential violations of federal securities laws.

If you have losses from investing in Northern Dynasty Minerals Ltd. (NAK) during the class period between December 21, 2017 through November 25, 2020, contact Silver Law Group for a no-cost consultation at (800) 975-4345 or at ssilver@silverlaw.com.

Northern Dynasty Minerals’ principal property is a proposed copper-gold-molybdenum project in southwest Alaska that covers 417 square miles known as the Pebble Project. On August 24, 2020, the U.S. Army Corp of Engineers put out a statement, which said that the Pebble Project would significantly degrade the environment and “likely result in significant adverse effects on the aquatic system or human environment.”

The Army Corps of Engineers also said that the Pebble Project would not be permitted under the Clean Water Act as currently proposed and requested that the company submit a mitigation plan to address their findings. The news caused Northern Dynasty stock to drop almost 40%.

On September 21, 2020, the EIA (Environmental Investigation Agency) released a recording of a conversation between Northern Dynasty executives and EIA investigators that showed the company expected the Pebble Project would have a life of 180-200 years, which was much longer than the company had said publicly.

On November 25, 2020 the company stated that the Army Corps of Engineers had rejected its mitigation plan regarding the Pebble Project, saying it was not compliant or in the public interest. That news caused the company’s stock to fall by 50%.

The class action complaint alleges that the company made false and/or misleading statements related to these issues.

On May 13, 2020, Northern Dynasty announced that it had closed an underwritten public offering of 14,375,000 common shares for gross proceeds of C$10.1 million. Cantor Fitzgerald Canada Corporation was lead underwriter and sole bookrunner for the offering, which included underwriters BMO Nesbitt Burns Inc., H.C. Wainwright & Co., LLC. And TD Securities Inc.

Silver Law Group represents investors who have lost money due to investment and securities fraud. Many cases involve violations of the federal securities laws, Ponzi schemes, and other fraud.

Scott Silver, Silver Law Group’s managing partner, is the chair of the Securities and Financial Fraud Group of the American Association of Justice. Silver Law Group represents investors around the country and internationally to recover money lost to securities investment fraud. Contact us today at ssilver@silverlaw.com or at (800) 975-4345.