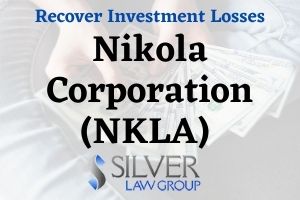 Silver Law Group is investigating Nikola Corporation (NKLA) regarding possible securities fraud, and may file a class action on behalf of investors.

If you have losses from investing in Nikola Corporation (NKLA) stock, contact Silver Law Group for consultation at no cost at (800) 975-4345 or by email at ssilver@silverlaw.com. Silver Law Group can provide a complimentary case evaluation and discuss investors’ options for pursuing claims to recover their losses.

Nikola Accused Of Being A Fraud

Nikola Corporation is an American company with plans to produce zero emissions vehicles. The company has gained much attention for its high-flying stock and $12.4 billion market capitalization despite having delivered no vehicles.

On September 10, 2020, investment analyst Hindenburg Research published a report on Nikola Corporation entitled ‘Nikola: How to Parlay An Ocean of Lies Into a Partnership With the Largest Auto OEM in America’.

The Hindenburg report alleges that Nikola “is an intricate fraud built on dozens of lies . . .” The report states that Nikola claims to “design all key components in house, but they appear to simply be buying or licensing them from third-parties…[W]e found that Nikola actually buys inverters from a company called Cascadia. In a video showing off its ‘in-house’ inverters, Nikola concealed the Cascadia label with a piece of masking tape.”

It is further asserted by Hindenburg that investors were misled by Nikola with regard to its battery and hydrogen fuel cell claims, as well as its purported “multi-billion-dollar order book,” which Hindenburg asserts is “filled with fluff.”

Nikola became public around June 4, 2020 after VectoIQ Acquisition, a special purpose acquisition company (SPAC) led by former GM executives and focused on the smart transportation industry, voted to approve the acquisition of Nikola Corporation. VectoIQ raised $200 million in a May 2018 IPO. In March 2020, the SPAC agreed to merge with Nikola Corp at an implied enterprise value of about $3.3 billion, having secured a $525 million private placement led by Fidelity.

Nikola will retain its CEO, Trevor Milton, who founded the company in 2014. The SPAC’s CEO, Steve Girsky, joins the board. Girsky is the former Vice Chairman of GM.

If you have investment losses with Nikola Corporation (NKLA), contact Silver Law Group, a nationally-recognized class action law firm representing investors, to discuss your legal rights and potential options to recover your losses.

Silver Law Group represents investors who have been the victims of investment fraud. Our attorneys represent investors in class actions against issuers in state or federal court and investors in securities arbitration claims against Wall Street firms for stockbroker misconduct.

Scott Silver, Silver Law Group’s managing partner, is the chairman of the Securities and Financial Fraud Group of the American Association of Justice and represents investors nationwide in securities investment fraud cases. Contact us today for a no-cost consultation at ssilver@silverlaw.com or toll free at (800) 975-4345.