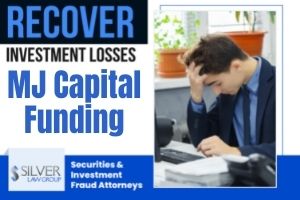 MJ Capital Funding, a business based in Pompano Beach, FL that claimed it used investor money to make merchant cash advance loans, has been accused by the Securities and Exchange Commission (SEC) of operating as a Ponzi scheme.

Silver Law Group is investigating a potential class action lawsuit to help investors recover their losses. If you are an MJ Capital investor, contact Silver Law Group at 855-755-4799.

On Friday, August 13, 2021 the SEC announced in a press release that it had filed “an emergency action and obtained a temporary restraining order, an asset freeze, and the appointment of a receiver to stop an alleged Ponzi scheme and misappropriation of investor proceeds perpetrated by Coral Springs, Florida resident Johanna M. Garcia and two entities she controls.”

According to the SEC’s complaint, Garcia and her companies, MJ Capital Funding, LLC and MJ Taxes and More, Inc., used fraudulent securities offerings to raise at least $70 million from over 2,150 investors.

The SEC’s complaint was filed in federal court in the Southern District of Florida on August 9, 2021 and was unsealed on August 13. The defendants are charged with violating registration and antifraud provisions of federal securities laws. The court granted emergency relief, and the complaint seeks injunctions, disgorgement, prejudgment interest, and a civil penalty.

Most people think of Bernie Madoff when they think of Ponzi schemes because his was the biggest. But since Madoff, there have been hundreds less-well-known Ponzi schemes that have caused investors to suffer significant losses.

Scott Silver, Silver Law Group’s managing partner, recently gave a presentation on Ponzi schemes to the American Association of Justice and how investors may be able to recover their losses from responsible third parties.

Contact Silver Law Group If You Have Ponzi Scheme Losses

Scott Silver is the chairman of the Securities and Financial Fraud Group of the American Association of Justice and represents investors nationwide in securities investment fraud cases. If you have investment losses, contact Scott Silver of the Silver Law Group for a no-cost consultation to discuss your options at ssilver@silverlaw.com or toll free at (800) 975-4345.