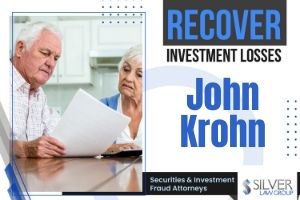 John Krohn (John Michael Krohn CRD#:2722975) is a former registered broker and investment advisor whose last known employer was Principal Securities, Inc. (CRD#:1137) of West Des Moines, IA. He has been in the industry since 1996, when he began at the firm.

Krohn is the subject of three client disputes with similar allegations. They first dispute was filed on 2/25/2019, with allegations that he “solicited large investments from them into venture capital companies owned, managed, or controlled at least in part by Krohn.” The client requests damages of $28,000,000.00.

The second claim, filed on 2/25/2020, alleges that the firm failed to supervise John Krohn, which included selling away and his outside business activities that caused them to suffer losses. This client requests damages of $1,200,000.00.

The third claim was filed on 4/6/2020. This client alleges that the firm failed to supervise Krohn’s  dealings with the claimants as well as his outside business activities. As a result, Krohn and the firm are responsible for their financial losses. They request damages totaling $10,000,000.00.

Previously, FINRA investigated Krohn and found that he had been conducting multiple business transactions separate from Principal Securities. This resulted in a three-month suspension from any FINRA member firm, a fine of $10,000, and his signature on an Acceptance, Waiver & Consent (AWC) letter.

The FINRA investigation found that there were two main factors:

Did You Invest With John Krohn?