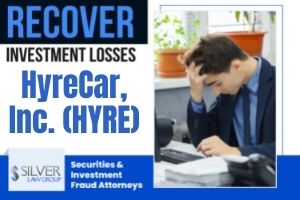 HyreCar, Inc. (HYRE) is the subject of a class action lawsuit filed on behalf of shareholders regarding alleged violations of the federal securities laws.

HyreCar is a publicly-traded Los Angeles-based company that operates a car sharing marketplace, which allows car owners to rent their cars to drivers for ride-share services like Uber and Lyft.

After market close on August 10, 2021, HyreCar stated in a press release that in Q2 2021 the company had net losses of $9.3 million. The company’s adjusted EBITDA loss was $7.1 million, which was more than four times higher than the $1.7 million adjusted EBITDA loss in the same quarter of the previous year.

According to the press release, gross profit for Q2 2021 was $0.8 million, which was less than one third what it was in the same quarter of the previous year.

At the same time the press release was issued, HyreCar filed a 10-Q with the SEC, which disclosed increasing costs of revenue during the quarter, which was attributed to higher insurance claims incidence.

HyreCar had previously represented that its goal was to achieve 45%-50% gross margins, but on an earnings call the CFO called that a “shoot for the sky” aim and suggested lower margins were realistic.

The day after the press release, HyreCar stock dropped in value by almost half, causing significant losses for investors.

HyreCar held its initial public offering (IPO) in 2018 with the offering of 2,520,000 shares of common stock priced at $5 per share. Network 1 Financial Securities, Inc. was the managing underwriter for the offering.

Silver Law Group is a nationally-recognized law firm representing victims of securities and investment fraud. Our attorneys represent investors in class action lawsuits against issuers in state and federal court and in arbitration claims in cases of stockbroker misconduct.