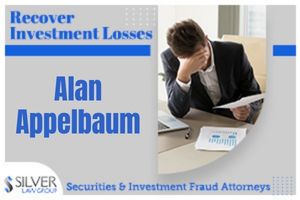 On July 28, 2022, the US Securities and Exchange Commission (SEC) filed a complaint in US District Court in the Southern District of Florida against Appelbaum, with the following allegations that occurred during his tenure at Aegis Capital Corp in Boca Raton:

As a registered representative, Appelbaum was required to determine whether an investment would be suitable for a customer. This includes considering their ages, investment objectives, risk tolerance, their financial needs, and other important factors that are covered in FINRA Rule 2111 regarding suitability. Appelbaum was fully aware of this rule and continued making purchases knowing that they were wholly unsuitable for these customers. VRSPs are recommended only for customers with “high” or “maximum” risk tolerances.

These customers were all over 55, with several over the age of 80. Appelbaum himself is 75. When questioned about losses, Appelbaum also made false and misleading statements to customers about the investments.

In the petition, the SEC asks for a jury trial, along with:

FINRA recently ordered Aegis Capital Corp. to Pay $1.7 Million in restitution to customers whose accounts were excessively and unsuitably traded commonly referred to as churning. Also, two supervisors were fined, and a supervisor was suspended for failing to respond to red flags and a financial advisor was sanctioned.

Excessive trading frequently leads to customer losses because the fees and commissions reduce the principal value of the account and requires even greater profits for the investor to break even. Aegis has been the subject of multiple securities arbitration claims involving allegations of excessive trading, churning and unsuitable recommendations.

Appelbaum has 18 disclosures on his publicly available FINRA BrokerCheck report, including 14 customer disputes:

May 2021: Appelbaum was permitted to resign from Aegis Capital Corp for allegations that he failed to follow firm procedures and “Exercised discretion without client’s written authorization.”

September 2019: A customer dispute alleged unsuitability and unauthorized transactions and settled for $1,650,000. Appelbaum denied any wrongdoing and said the investments recommended were suitable.

November 2018: A customer dispute alleged unsuitable investment recommendations from 2015-2018 and requested $1,800,000 in damages. The dispute was closed with no action.

December 2015: A customer dispute alleged “failure to recognize claimants change in circumstances and desire to pursue a low-risk conservative strategy, unsuitable trading in proprietary investments and structured products between the years of 2012 and 2014.” $50,000 in damages were requested and the case settled for $20,000.

August 2014: A customer dispute alleged “breach of fiduciary duty, a failure to supervise, negligence, fraud, breach of contract and violation of NASD and FINRA rules.” $350,000 in damages was requested and the case settled for $25,000.

September 2009: A customer dispute alleged that recommendations were “not consistent with clients investment goals and objectives.” $500,000 in damages were requested and the claim was denied.

July 2006: A regulatory disclosure alleges “Mr. Appelbaum serviced eight brokerage accounts for NH residents, which were opened and transacted under another registered representative’s number. Mr. Appelbaum was not licensed to sell securities in NH. the bureau alleged that Mr. Appelbaum engaged in unlicensed activity in violation of RSA 421-b:6,i.” Appelbaum was fined $55,000.

March 2006: A customer dispute alleged that the broker’s mark-up on bonds was excessive. The claim was settled for $250,000.

December 2003: A customer dispute alleged negligence, breach of fiduciary duty, and improper management and monitoring of an account. $523,129 in damages were requested and the case settled for $42,500.

April 2003: A customer dispute alleged the recommendation of unsuitable, speculative securities. $213,000 in damages was requested and the case settled for $3,750.

August 2002: A customer dispute alleged the purchase of high yield bonds was contrary to investment objectives. $216,708 in damages was requested, and the case settled for $2,500.

May 2002: A customer dispute expressed dissatisfaction with the recommendation municipal bonds. $136,238 in damages was requested. The case settled for $15,000.

October 2001: A customer dispute expressed dissatisfaction with the recommendation of municipal bonds. The claim was settled for $75,000.

February 1982: A regulatory disclosure initiated by the SEC states that Appelbaum was subject to a censure. “J.B. Hanauer & Co., a firm with which Mr. Appelbaum was previously affiliated, was the subject of injunction proceedings and that firm was permanently enjoined for violating the anti-fraud and record keeping provisions of the federal securities laws as well as the rules of municipal securities rule making board. Mr. Appelbaum, however, was not the subject of the injuctive order, but rather, was subject to a censure,” the broker comment section states.

Silver Law Group has extensive experience representing investors in claims to recover losses for unsuitable investments. We represent investors nationwide to recover investment losses due to stockbroker misconduct, investment fraud, and other causes.

If you have investment losses, call today for a no-cost, confidential consultation with an experienced securities attorney. Most cases are handled on a contingency fee basis, so you won’t owe us until we recover your money for you. Contact us at (800) 975-4345.