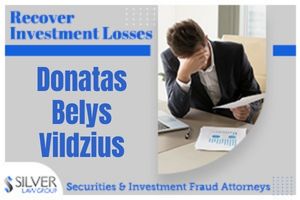 Vildzius is the subject of twelve disclosures, including two civil judgments from 2012 totaling $9,062 and multiple regulatory sanctions.

The most recent action was initiated by FINRA after Vildzius was found to have churned the accounts of two clients with excess trading. This action occurred between August 2015 and April 2017, when he recommended a short-term trading strategy that involved in-and-out trading. The result of these trades was a high turnover rate and excessive fees.

After signing the Acceptance, Waiver & Consent (AWC) Letter, FINRA fined Vildzius $5,000 and suspended him from any association with any FINRA member firm for six months, beginning 10/9/2020.

This was not the first AWC letter for Vildzius. Previously, he signed an AWC on 1/31/2014. By signing the AWC, he was subject to a $2,500 fine and agreed to a one-month suspension for failing to disclose the two civil judgments dated 6/13/2012.

A third AWC signed on 4/10/2006 led to a 30-day suspension in all capacities, a fine of $9,000 and restitution in the amount of $16,000 for similar allegations. This complaint was filed by NASD, and was in response to “exercising discretion in one customer account without prior written authorization and engaging in unsuitable and/or excessive trading in that customer’s account.”

In August of 2006, the state of Connecticut restricted Vildzius’ registration as a result of the NASD action.

Wachovia had previously terminated Vildzius’ employment on 1/9/2006 after allegations of excessive trading. Although one client ultimately did not pursue her claim of an unauthorized margin call, it came after a previous dispute filed on 2/13/2004. In the earlier complaint, the client alleged through her attorney that Vildzius also committed churning and unauthorized trading. The client requested damages of $5,000, and the claim was settled for $95,000.