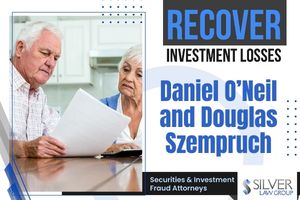 Daniel O’Neil (Daniel James O’Neil CRD#:1358245) is a former registered broker with Aegis, who discharged him on 7/29/2021 for failing to notify the firm about a “pending enforcement investigation” by FINRA. The investigation focused on “conduct inconsistent with firm standards.”

The enforcement action was based on a customer dispute filed on 2/3/2021 in which it was claimed O’Neill made unsuitable investments, and no damages are yet recorded. In the complaint, FINRA describes O’Neill’s actions as:

O’Neill’s record also includes six tax and civil judgments that total $140,007.81 in liens dating back to 2012. No additional information is available on these disclosures.

Douglas Szempruch (Douglas Edward Szempruch CRD#: 4159318) is a registered broker with Aegis that FINRA recently suspended after he was also found to be engaged in excessive trading in six accounts without customer consent or authorization. During the process, Szempruch failed to take into account the risk tolerance of each client. The investigation began after an anonymous tip through FINRA’s Office of the Whistleblower.

Szempruch also made misleading statements about a company he was pitching to 34 clients in an email as an investment. In it, Szempruch told prospects that he had “first-hand information” about the company because he had:

Actually, Szempruch was invited to visit their production facility but never did. His colleagues who did visit the facility briefed him upon their return. Although he followed the company closely, he was not in touch with company management. While Szempruch’s colleagues at Aegis participated in status conferences, the company ended their participation after executing an agreement with Aegis in March of 2017.

After the investigation, FINRA imposed the following sanctions, to which Szempruch agreed:

After submitting a statement detailing his current financial situation and ability to pay, FINRA did not impose any administrative fines over and above restitution plus interest.

Two customer disputes were both resolved with Szempruch commenting that they were both client miscommunications.

The most recent, dated 2/28/2018, list allegations of “poor performance and unsuitable recommendation.” The claim settled for $30,000.

His first customer dispute is dated 5/28/2004, claiming unauthorized trading, requesting damages of $5,994.35. The claim was settled for $250, with broker comments that it was “forgotten.”

Szempruch also has a 2005 criminal charge in his record for bribery and possession of stolen property. He pleaded guilty to a lesser charge of attempting to obstruct government administration, a class B misdemeanor, and was convicted. Afterward, he paid a $250 fine and received a one-year conditional discharge.

Did You Invest With Dan O’Neil or Douglas Edward Szempruch?