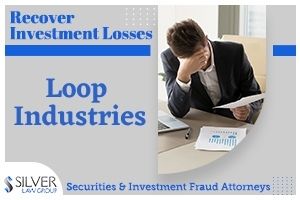 It’s happened again—a startup company that touted revolutionary changes to an industry is being accused of fraud.

After Elizabeth Holmes and her blood-testing company, Theranos, had a reputation later discovered as built on falsehoods, a Canadian recycling company is being accused of misrepresentations. Similar to Theranos, Montreal-based plastic recycler Loop Industries claims to have “revolutionary technology.” Now, Loop has been outed by a report from Hindenburg Research that reports more than what’s been told.

Hindenburg culled information from various sources, including industrial experts, company partners, competitors, company documents, as well as former employees of the company. They also submitted their findings to regulators.

After the Hindenburg report’s release, shares of the company have dropped nearly 40%. Silver Law Group is a securities fraud law firm that represents investors in class action lawsuits. This blog may be considered advertising.

Although plastic recycling is more widespread than ever before, the practice isn’t without faults. Not every type of plastic is recyclable, and some are more difficult than others.

PET, or polyethylene terephthalate, is the plastic that’s ubiquitous in bottled water, as well as packaging for foods and other beverages.

Just last month, the company released 1,880,000 shares of its common stock at a price to the public of $12.75 per share. Roth Capital Partners was acting as the sole manager for the offering.

This description published at PlasticsToday.com read:

Loop Industries describes itself as a technology company whose mission is to accelerate the world’s shift toward sustainable PET plastic and polyester fiber and away from our dependence on fossil fuels. Loop Industries owns patented and proprietary low-energy technology that depolymerizes no- and low-value waste PET plastic and polyester fiber — including plastic bottles and packaging; carpets and textiles of any color, transparency or condition; and even ocean plastics that have been degraded by the sun and salt — to its base building blocks (monomers). The monomers are filtered, purified, and polymerized to create virgin-quality Loop-branded PET resin and polyester fiber suitable for use in food-grade packaging, thus enabling its customers to meet their sustainability objectives.

Unfortunately, that’s not quite the way the company works according to some reports.

The company claims that it uses its own proprietary technology that breaks down these PET plastics into base building blocks that can then be recycled. Large chemical companies such as Dow, 3M and DuPont have worked on the PET purification solution for more than 50 years and still haven’t been able to “clean” the plastic down to reusable materials.

The company claims that its Gen II technology was easier than Gen I, and is revolutionary because it uses “zero energy input.” But after interviewing a number of insiders, that’s not exactly the case.

According to reports, Loop is run by two brothers, Adel Essaddam, who is listed as the company’s “lead scientist,” and Fares Essaddam, listed as the company’s “technology lead.” These twenty-somethings claim to have “co-invented” and patented Loop’s technology that no other company was able to do. The brothers run the company with their father, have no education or experience in science or chemical engineering, nor any work experience aside from Loop Industries.

Former employees explain that there were two labs: a private one for the Essaddams, and one for the scientific staff. “Breakthroughs” happened in the Essaddam lab, and were brought out to the secondary lab where the staff scientists were required to replicate these incredible results. Unfortunately, no one was able to successfuly recreate anything that came out of the Essaddam lab.

A former employee described the Essaddam lab as “dangerous,” because at one point the lab experienced an explosion from toxic fumes as a result of the “work” being conducted. They would also give samples to the staff scientists without telling them the contents. The results given back to the Essaddams “did not sit well” with them.

Hindenburg’s assessment is that “Loop is smoke and mirrors with no viable technology.”

Before the recycled plastic can be re-used and made into something else, it undergoes a purification process that removes dyes and other substances. One of Loop’s competitors admitted that purification is the most difficult part of the process, because it’s dissolved in a liquid.

“Because the separation from the dyes and the organic element that are inside the PET waste and potentially dissolve in liquid is the most challenging part. It is where you have to start inserting some catalyst which is actually what most of our competitors tried to do, or in the case of Ionica they used some magnetic nanoparticles. But if you use a catalyst then you start to see chemical elements appearing in the final PET after you have depolymerized and this is where you get troubles with the purification.”

One chemist and several former employees told Hindenburg’s researchers that despite Loop’s attempts to clear out other substances from the PET, they were unsuccessful. Claims of breaking PET down into base chemicals with a 100% recovery rate were called “technically and industrially impossible.”

The company’s patents specifically involve depolymerization, but use well-known methods. There is no evidence that their patented methods have any specific ways to purify PET that are better than current industry best practices.

According to the report, Loop has never generated any revenue and currently has an accumulated deficit of $62.3 million. The company also has $48 million in cash, and without any new cash investments, could burn through these reserves quickly.

Loop’s CEO, Daniel Solomita, also appears to have no scientific or chemical education or background. He does, however, have a background in stock promotion for another publicly traded company. That company later “imploded.”

Solomita is also accused of pressuring employees to lie about the company’s technology and to produce the results to his and the Essaddam’s specifications. Employees who did not do what Solomita asked, or failed to accomplish the feat fast enough, were verbally abused, sometimes for hours.

Loop engaged in a number of corporate partnerships for recycling food-grade plastics, including Nestle, Coca-Cola, L’Oreal, Evian, and L’Occitane. However, it seems that these partnerships didn’t amount to very much, and no company has yet acquired any of the purified plastics from Loop.

One of those contracts was with a PepsiCo subsidiary called Drinkfinity. The premise was a travel water bottle and an available series of blended fruit flavors available in pods similar to those for single-serve coffee makers.  Although the company’s website is down, the company’s Amazon page is still live, with all the products marked as “currently unavailable.”

Loop contracted with Drinkfinity to recycle the discarded pods that were to be mailed to a recycling contractor address in Vermont, then driven 66 miles north to Montreal. Unfortunately, those pods also contained aluminum, which is even more difficult to remove from PET, if not impossible. The Vermont recycling company is currently unsure of its future business with Loop.

The entire 28-page report from Hindenburg Research is available on their website, complete with references.

Have You Invested With Loop Industries?

Silver Law Group represents investors in securities and investment fraud cases. Our lawyers are admitted to practice in New York and Florida and represent investors nationwide to help recover investment losses due to stockbroker misconduct. If you have any questions about the Loop Industries class action, call to speak with an experienced securities attorney. Most cases are handled on a contingent fee basis, meaning that you won’t owe us until we recover your money for you. Contact us today and let us know how we can help.