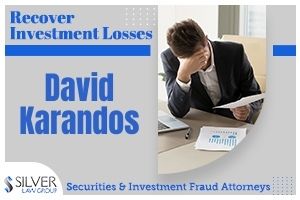 David Karandos is the subject of 12 disclosures on his publicly-available BrokerCheck report, which includes 6 customer disputes, 2 regulatory, 2 judgment/lien, 1 financial, and 1 criminal:

November, 2020: A customer dispute alleged that “Karandos placed client in unsuitable investments from 2014 to 2018 and improperly withdrew funds from other family accounts from 2016 to 2018.” $436,000 in damages were requested and the dispute is pending as of this writing.

November, 2020: A customer dispute alleged that “unsuitable recommendation during October 2014 through May 2017.” The dispute is pending as of this writing.

May, 2020: A customer dispute alleged that “Karandos placed him in unsuitable investments, including two private placements and life settlement viaticals, from 2013 to 2017. Other customer alleges that Karandos converted the proceeds of a viatical in or around 2016.” $500,000 in damages were requested and the dispute is pending as of this writing.

October, 2013: A regulatory disclosure initiated by the State of Michigan alleged that Karandos “omitted information on his U-4 form related to a compromise with a creditor and his criminal history, he is the subject of an order issued by a state securities regulator and has engaged in dishonest or unethical practices in the securities and investment business within the previous 10 years.” The broker commented that he did not intentionally omit information, and that when the omition was brought to his attention, he amended his U4.

September, 2012: A bankruptcy is disclosed. Karandos commented that the bankruptcy was the result of Morgan Stanley terminating his contract and not restructuring or forgiving the $1,100,000 debt from his sign-on bonus.

December, 2011: A customer dispute alleged breach of fiduciary duty “through unsuitable recommendations of volatile, high-risk and illiquid investments.” The dispute was settled for $313,564.64.

May, 2011: A customer dispute alleged that “between 2004 and 2008 Karandos breached fiduciary duties owed to the Indiana State Teachers Association (ISTA) by recommending and/or permitting the purchase of an excessive amount of alternative investments in ISTA’s portfolio.” The dispute was settled for $493,000.

October, 2010: A regulatory disclosure initiated by the Indiana Securities Division alleged that Karandos “engaged in unethical and dishonest practices” when he misrepresented as suitable to a client alternative investment products. A $50,000 disgorgement was ordered and Karandos was suspended in Indiana in all capacities for 75 days. Karandos admitted that he “facilitated the sale of alternative investments to his client which exceeded the investment policy of his client”.

August, 2003: A customer dispute alleging unsuitable and unauthorized transactions requested $32,554 in damages and was settled for $27,500.

April, 2002: A criminal disclosure related to operating a vehicle while intoxicated appears on Karandos’ record. He was found guilty on a misdemeanor charge, his license was suspended for 180 days, and received 365 days probation.

Allegations Of Unsuitable And Alternative Investments

Many of the customer disputes against David Karandos allege unsuitability of investments they were sold. Karandos is regulated by FINRA rules and federal securities laws, which require that a broker have a “reasonable basis” to recommend a transaction or strategy. To know what is suitable for a given customer, the broker needs to understand the customer’s investment profile, including factors such as their age and tolerance for risk.

Some alternative investments pay a high commission to the broker who sells them. Motivated by money, brokers push these investments on their clients even when they are unsuitable for their investment needs.

Did You Invest With David Karandos?

If your stock broker or financial advisor put his financial interests ahead of yours, or recommended an unsuitable investment, you may have a claim to recover your losses through FINRA arbitration.

Silver Law Group represents investors nationwide in securities and investment fraud cases. Our experienced lawyers may be able to help you recover investment losses due to stockbroker misconduct. If you have any questions about your account, call us at 800-975-4345. We take most cases on a contingency fee basis, meaning that you owe us nothing unless we recover your money for you. Contact us today.