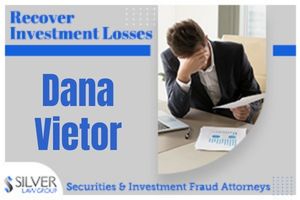 FINRA began an investigation into Vietor’s records, discovering that he engaged in the sale of promissory notes that were called “deposit agreements.” According to the allegations, these agreements totaled over $3 million. However, Vietor failed to disclose this information to the investors. He also did not receive written approval from his member firm for these private security transactions.

According to FINRA’s investigation findings, Vietor, along with his other business partners, engaged in a startup business venture in need of funding. These deposit agreements raised the needed capital for these entities associated with the startup. Because Vietor is part of the management team for these entities, and he has membership interests in each one, Vietor also received indirect selling compensation while involved in these private transactions.

As a result, Vietor is permanently barred in all capacities after he signed an Acceptance, Waiver and Consent letter (AWC.) The bar is indefinite and became effective on 3/23/2020.

Vietor’s FINRA CRD also lists a total of nine customer disputes associated with the private transactions and selling away that were filed after leaving CFD Investments. All told, these nine transactions request damages of $5,226,822.50. These customer disputes include similar allegations, which include common law fraud, misrepresentation, and other charges. The disputes are dated from 3/13/2021 through 2/1/2022.

Also included in the disputes are the member firms with whom Vietor was affiliated. They include allegations of breach of contract/fiduciary duty, failing to supervise, negligent supervision, aiding and abetting fraud, and violations of the Iowa Securities Act.

Member firm CFD Investments allowed Vietor to resign, effective 11/12/2018. The allegations were similar, that he engaged in private security transactions without seeking approval in writing or providing any information to the firm. Additionally, he submitted his regular annual compliance questionnaires to the firm stating that he was not engaged in any private securities transactions.

Preceding Vietor’s resignation from CFD Investments were four previous customer disputes. These claims were settled for various amounts. Out of the four, three were settled and one was denied.

The three claims were filed on 2/28/2011, 10/3/2011, and 4/4/2017. All three involved investments that were unsuitable, including variable annuities and over-concentration in real estate investment trusts, or REITs.

The denied claim, filed on 11/10/2010, alleges that Vietor exercised discretion in the client’s account by purchasing shares of Phillip Morris stock on 10/27/2010, without the client’s knowledge or consent. No additional information is available.

In 2005, the State Of Minnesota Commerce Department fined Vietor $300 for failing to deliver contracts to a client within 30 days. Vietor claimed that the client was traveling at the time.

Did You Invest With Dana Vietor?