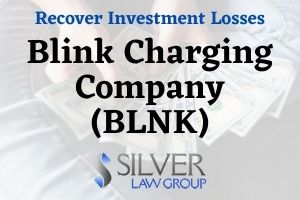 Blink Charging Company (BLNK) is the subject of a class action lawsuit that has been filed on behalf of investors, alleging securities fraud. Investors may have claims to recover losses.

If you have losses from investing in Blink Charging Company (BLNK) stock, contact Silver Law Group for a no-cost consultation at (800) 975-4345 or by email at ssilver@silverlaw.com.

Blink is in the business of electric vehicle charging equipment and services. The complaint for the class action lawsuit alleges that Blink misrepresented and concealed:

On August 19, 2020, Culper Research released a memo stating that it was short the company and believed that “the company has vastly exaggerated the size of its EV charging network in order to siphon money from the pockets of investors to insiders.” Culper states in the memo that the company only has 2,192 functional charging stations, though it claims to have 15,000.

The report goes on to state “We believe Blink is a scheme designed by Chairman and CEO Michael D. Farkas to pillage minority investors to the benefit of insiders. Since 2014, compensation expense of $44 million is more than double the company’s $18 million in cumulative revenues, which have remained flat…”

The same day as the Culper memo, another report came out that questioned whether Blink’s CEO had ties to alleged penny stock dealers and pump and dumpers. On news of these reports, Blink’s shares traded significantly lower, causing losses for shareholders.

Blink Charging raised $23 million in an initial public offering on the week of February 12th, 2018. The company issued 4,600,000 shares at $5.00 per share. Joseph Gunnar served as the underwriter for the IPO and Benchmark and Dawson James Securities were co-managers.

Do You Have Investment Losses Blink Charging Company (BLNK)?

A class has not been certified in this case and a lead plaintiff (class representative) has been selected. The deadline to apply to be lead plaintiff is October 23, 2020. The class period is March 6, 2020-August 9, 2020.

Silver Law Group is a nationally-recognized law firm representing investors in cases of investment fraud in class actions against issuers and in securities arbitration claims against broker dealers and brokers. Scott Silver, Silver Law Group’s managing partner, is the chairman of the Securities and Financial Fraud Group of the American Association of Justice. If you have losses from owning Blink stock, contact us for a no-cost consultation at (800) 975-4345 or ssilver@silverlaw.com.