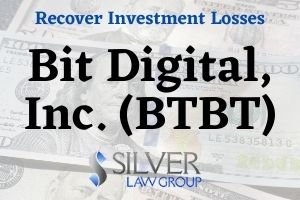 Allegations In The Class Action

The complaint alleges that throughout the class period Bit Digital exaggerated the scope of its Bitcoin mining operations, and because of that their positive statements about the company and its prospects were misleading or lacked reasonable basis.

The class action lawsuit claims that investors suffered damages after the true details became known to the market. A class has not yet been certified in the action against Bit Digital. If you would like to be a lead plaintiff/class representative, you need to move the court before March 22, 2021.

At the time it went public in 2018, Bit Digital was known as Golden Bull Limited. Trading under the symbol DNJR, the company claimed to operate a peer-to-peer (P2P) lending platform in China that connected individual lenders and small business borrowers.

At one point the company also claimed to operate a car leasing business. In September, 2020, the company changed its name to Bit Digital, Inc. (BTBT), and said that it was mining Bitcoin in China.

A Seeking Alpha article alleges that Bit Digital is not actually mining Bitcoin, and that their previous P2P lending and car rental businesses were fake as well. The article claims that four company executives are in jail and the former chairman and CEO of the company is being sought by Chinese police.

In March, 2018, Bit Digital, then using the name Golden Bull Limited, announced its initial public offering of 1,550,000 shares and gross proceeds of about $6.2 million. ViewTrade Securities, Inc. was the sole book-running manager for the offering.