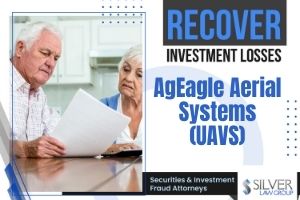 Bonitas Research recently published a new report on AgEagle Aerial Systems, Inc. (UAVS) revealing that the company is not all it claims to be, and actively worked to defraud US investors.

In its release, Bonitas stated:

“We believe that AgEagle Aerial Systems Inc.’s (“UAVS”, “AgEagle”, or the “Company”) was a pump & dump scheme orchestrated by Alpha Capital Anstalt (“Alpha Capital”), AgEagle founder and former chairman Bret Chilcott and other UAVS insiders to defraud US investors.”

Based in Witchita, KS, AgEagle is a company that manufactures drones (unmanned aerial systems) and offers drone solutions for a range of different industries, including agriculture. Their website includes a description of their drone delivery work that the company has worked on since 2019. Although Amazon is not specifically mentioned, the web page includes a picture of a non-branded packing box flying under a drone.

At issue is a promo video uploaded to YouTube and to a website belonging to the daughter of former chairman of AgEagle, Bret Chilcott. This video implied that the company had a partnership with e-retailer Amazon. Although Amazon has long had plans for a short-range drone-delivery service called Amazon Air, the service is still in the research and testing stage. This video implies that AgEagle was partnering with Amazon for their drone-delivery platform. It is still on YouTube, although not from AgEagle’s official channel.

On September 3, 2019, the company issued a press release discussing the company’s foray into commercial drone delivery services for packages. Amazon was mentioned along with a number of other companies that are interested in providing the same service, and the press release implied a relationship with Amazon.

Additionally, a 54-page due diligence document regarding the alleged partnership has since began making the rounds on the social media site Reddit. This is the same site that hosted discussions leading to the rise of Gamestop stock in late January.

The rumors of an implied Amazon partnership sent AgEagle’s stock from .39 per share to $16 per share. However, inside ownership went from 44% to just .5%.

On October 14, 2020, a spokesman for Amazon also told reporter Daniel McCoy of the Witchita Business Journal that the company is in no way involved with AgEagle. Bonitas since has found no evidence of any partnership between AgEagle and any major ecommerce client outside of the frequently-deleted video and documentation on Reddit.

Are You An Investor In AgEagle Aerial Systems (UAVS)?

If you’re an investor in AgEagle Aerial Systems, you’re encouraged to contact Silver Law Group for additional information and to help us in our investigation.