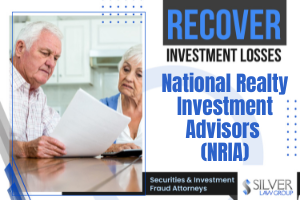 National Realty Investment Advisors (NRIA), a private real estate developer based in New Jersey, has filed for Chapter 11 bankruptcy protection. The company, which has projects in Florida, Pennsylvania, New Jersey, and New York, said it had assets worth $50 million to $100 million and liabilities of $500 million to $1 billion.

According to reports, NRIA, which purported to have $1.25 billion in assets under management in 2021, is under investigation by the FBI (Federal Bureau of Investigation), the SEC (Securities and Exchange Commission), and state regulators in Illinois, New Jersey, and Alabama.

Founded in 2006, NRIA promoted itself as a “vertically-integrated real estate investment, management and development firm,” with a focus on townhomes, condos, multifamily, and mixed-use projects, according to its website.

In March, 2021, NRIA portfolio manager Nick Salzano (Thomas Nicholas Salzano) was arrested by the FBI and charged with using a fake loan guarantee document to defraud an investor out of $150k. The complaint charged Salzano with one count of aggravated identity theft and one count of wire fraud.

According to a press release by the Department of Justice, an investor known as “Victim 1” heard an NRIA advertisement on the radio and purchased three units in the company’s real estate fund in 2018 for $150,000. The victim was promised 6 percent return to be paid monthly for the first two and a half years of the five-year term and possibly greater returns for the second half.

After the first investment, Victim 1 was approached about becoming a joint venture partner with NRIA in a North Bergen, New Jersey property. The victim was told she could use her original $150,000 investment toward the $300,000 minimum for the new investment.

Salazar sent the victim a letter of intent from a lender that was signed by the lender’s CEO. The letter was fake and the signature was forged, according to the DOJ.

In March, 2022, U.S. Construction (USC) sued NRIA in federal court for breach of contract and seeks over $29 million in damages.

The suit concerns land in Philadelphia owned by an affiliate of NRIA that USC agreed to develop for NRIA in 2017, which included a complex of apartment towers. The suit alleges that NRIA canceled the agreement with USC in 2021 and refused to pay reimbursable expenses and outstanding fees.

Did You Invest in NRIA?

Silver Law Group represents investors in securities and investment fraud cases. Our lawyers are admitted to practice in New York and Florida and represent investors nationwide to help recover investment losses due to stockbroker misconduct.

If you have any questions about your investment, call to speak with an experienced securities attorney. Most cases are handled on a contingent fee basis, meaning that you won’t owe us until we recover your money for you. Contact us today at (800) 975-4345 and let us know how we can help.