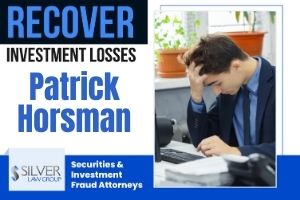 Patrick Horsman (Patrick Brian Horsman CRD# 4694883) is a previously registered broker who was registered with Blue Sand Securities LLC (CRD# 142976), based out of Bay Harbor Islands, Florida from 2007 until October 2020. Horsman was in the brokerage industry from 2003 until he left Blue Sands Securities LLC last year.

In 2017, Horsman consented to being sanctioned by the Financial Industry Regulatory Authority (FINRA) following an enforcement action. According to FINRA’s Letter of Acceptance, Waiver and Consent with Horsman (AWC), Horsman violated FINRA rules by purchasing shares in initial public offerings (IPOs) while associated with a FINRA member firm and by failing to disclose personal brokerage accounts to his firm, Blue Sand. For this misconduct, Horsman consented to a 10-day suspension from association with any FINRA member firm, a fine of $20,000, and payment of more than $10,000 in disgorgement.

In connection with this same conduct, the Massachusetts Securities Division obtained Horsman’s consent to three years of heightened supervision and an audit of Horsman’s personal securities transactions. Moreover, Horsman was restricted from performing principal, supervisory, or managerial duties for three years with respect to Massachusetts-based customers.

Horsman’s FINRA Record Discloses A Pending Civil Lawsuit Against Him

According to Horsman’s CRD Report, published by FINRA, Horsman is currently the subject of a pending civil lawsuit. Silver Law Group obtained a copy of the Complaint, which alleges that Horsman and/or the other Defendants, committed “fraud, constructive fraud, civil conspiracy, negligent misrepresentation, aiding and abetting tortious conduct, breach of the implied covenant of good faith and fair dealing, conversion, unjust enrichment” and other improper conduct.  For more information on this lawsuit, see Silver Law Group’s in-depth page on the subject.

The Maricopa County suit concerns Horsman’s involvement in a business called Integrated CBD. According to the lawsuit, Horsman planned to purchase land in which to farm industrial organic hemp to extract the CBD to sell to both commercial and consumer markets. The suit alleges that Horsman was the “mastermind and ringleader” of the scheme, and conspired to “run ICBD into the ground” and “caused Plaintiffs’ investments in the Company to vanish into each and all of the Defendants’ coffers.”

According to the suit, Horsman used some of the business’ capital to purchase a Canadair LTD CL-600 Challenger private jet, embellished with the name of his own investment firm, “Horsman Holdings.” The suit alleges that the plane was purchased for roughly $1M, after the company laid off all of its employees, became defunct, and then applied for a federal Paycheck Protection Program (PPP) loan.

Did You Invest With Patrick Horsman?

Silver Law Group represents investors in securities and investment fraud cases nationwide. Our lawyers represent investors nationwide to help recover investment losses due to stockbroker misconduct and investment fraud in securities arbitrations and in state and federal court, including class actions. If you have any questions about your investments with Horsman, call to speak with an experienced securities attorney. Most cases are handled on a contingency fee basis, meaning that you won’t owe us until we recover your money for you. Contact us today and let us know how we can help.