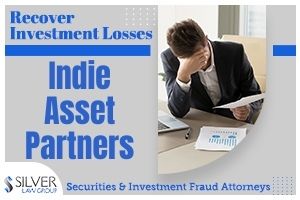 All Roads Lead To Prophecy, Which Is The Subject Of Allegations Of Serious Financial Misconduct

Silver Law Group’s investigation has revealed that Indie Asset Partners was recommending that its clients invest in Prophecy Asset Management, L.P. (“Prophecy”), an investment fund that purported to spread investor funds across several sub-advisors that would in turn manage investors’ money.  Prophecy is now the subject of a Delaware lawsuit that alleges, among other things, that:

These allegations stem from Prophecy directing millions of dollars of investor funds to several problematic sub-advisors.  One is Brenda Smith, who has been sued by the Securities and Exchange Commission for perpetrating multi-million-dollar Ponzi scheme. Another is Brian Kahn, who Silver Law Group’s investigation has revealed may have lost millions in investors’ money through First Landing.

You May Be Able To Bring A Claim Against Indie Asset Partners For Your Losses?

If Indie Asset Partners recommended that you invest in Prophecy, First Landing, IDAF, IDARF, and/or IDIF, you may have a claim for recovery of your losses against Indie Asset. Silver Law Group currently represents Indie Asset clients and is continuing to investigate potential claims and learn more.