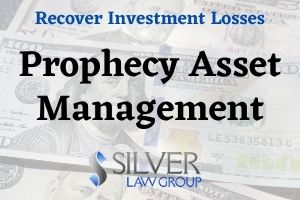 Silver Law Group is investigating potential claims arising from losses in Prophecy Asset Management, L.P. (Prophecy), an investment fund that has been the subject of recent litigation and that may have lost hundreds of millions of dollars over the past two years.

Prophecy is a New York-based investment operation owned and operated by Jeffrey Spotts. Prophecy’s investment model involves conduct thorough research and selecting various sub-advisors to manage its capital.  However, two of the sub-advisors Prophecy has opted to do business with over the past several years have create cause for serious concerns among investors.

In July 2020, two investment funds that invest with Prophecy filed a Complaint for Inspection of Books and Records against Prophecy and its managers in Delaware Chancery Court. Among the allegations in the lawsuit are assertions that the Plaintiff needs access to Prophecy’s books and records because Prophecy cannot account for money the Plaintiffs invested in Prophecy. These allegations include:

Among other issues, the Delaware case raises serious concerns about Prophecy’s selection of sub-advisors to manage investor monies. One sub-advisor is Brenda Smith, who has been sued by the Securities and Exchange Commission for perpetrating multi-million-dollar Ponzi scheme. The Delaware case alleges that Prophecy’s manager, Jeffrey Spotts had improper financial relationships with Smith that led to Prophecy’s investment in her fund, which the SEC characterized as an “obvious fraud.” Another problematic sub-advisor is Brian Kahn, who Silver Law Group’s investigation has revealed may have lost millions in investors’ money through First Landing.

If the allegations in the Delaware action are true, Prophecy may have lost hundreds of millions of dollars for investors.

Silver Law Group currently represents and is continuing to investigate claims on behalf of Prophecy investors who were have suffered losses and illiquidity due to issues with the fund.  Silver Law Group is experienced in representing investors in securities and investment fraud cases due to financial fraud and misconduct nationwide.  If you or someone you know invested in Prophecy and/or with Jeffrey Spotts, please contact Silver Law Group toll free at (800) 975-4345 or email ssilver@silverlaw.com for a confidential consultation.